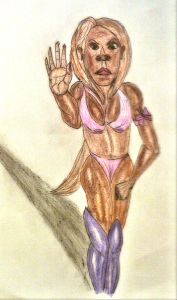 It’s ironic that President Trump has taken to referencing African nations as “shitholes”, since the novel I’m prepping takes place in one of these very locales, the ancient land of Ethiopia. I say this only because the first Ethiopian empire was founded in 100 A.D. Know where the United States was then? Ohhh, yes, we didn’t exist yet! As I recall, having actually studied history in school, our white European ancestors were still groaning under Roman dominion, not too many centuries before the Dark Ages. What would Africa have over the next 1,000 years? Hmm, Great Zimbabwe, the kingdom of Kush (founded 1,000 B.C.), the city of Timbuktu, founded in the empire of Mali in the 12th Century…now who’s the shithole, Mr. Prez?