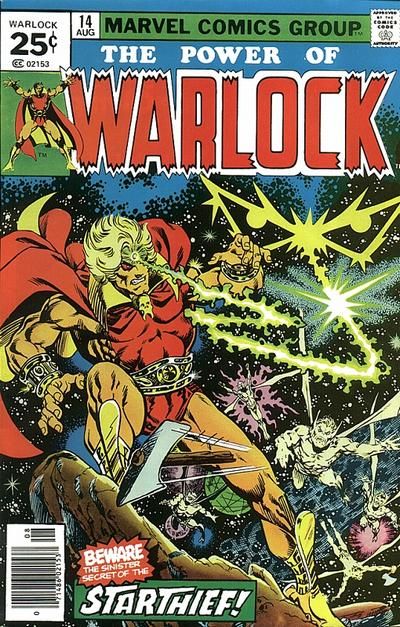 Funny the images that stick with you… 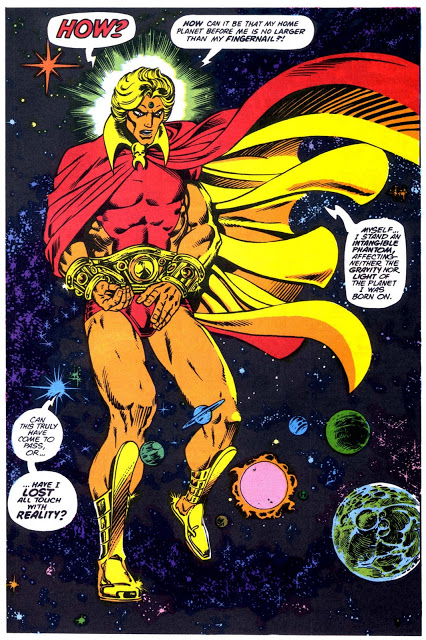 I was a young lad of thirteen when I first saw this and now that I’ve re-read the series I’m finding it hard to get out of my mind. Clearly the science isn’t all up to snuff, but this is the kind of thing that just fires the imagination.

The stars have been vanishing not just from the evening sky but throughout the universe. The culprit, Adam Warlock discovers, is Barry Bauman, a bedridden man with infinite cosmic abilities. This man, rightly named the Star Thief, is deaf dumb blind comatose and under the constant care of a male nurse hired by his wealthy father. All these years and I never realized before–Star Thief is Tommy! 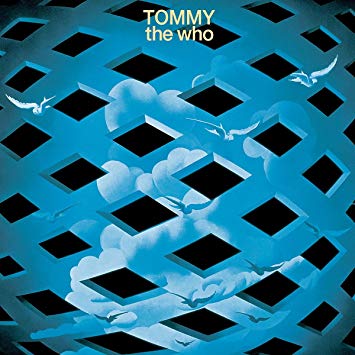 [If anyone doesn’t know the rock opera by The Who, you must look it up. Play the CD once, you’ll get it.]

Our golden-skinned hero is forced to undergo a series of trials testing his assertion that he is in fact a true Warlock. These take the form of beasts in the form of the classical elements–earth, air, water and fire. Although he was clearly a transitional villain, the filler between main events, I quite liked Star Thief, not only because he was supremely powerful but, he was also a royal smartass:

“The third threat will be aquatic. It’s a fearsome creature quite popular in the imaginations of our fellow Earthmen and…it’s sneaking up behind you.”

Barry’s goal is to plunge the Earth into panic and chaos before he extinguishes our Sun as well. Problem one for Warlock is that he’s light years away from our solar system. In another of the many psychedelic twists artist-writer Jim Starlin prides himself on, to accomplish his mission our hero is forced to risk a trek through a black hole. [OK, I should mention that the science is often psychedelic BS but it is applicable to the plot.]

Once he makes the transit however, Adam Warlock faces a bigger problem. Seriously, which leads to one of the most intriguing applications of the Expanding Universe Theory in comic book history. Warlock has reached Earth but he cannot touch his enemy without destroying every other person on the planet.

In the end he serves as enough of a distraction for Barry Bauman’s nurse to shake off his mental control and murder him. And Warlock’s colossal size, while intriguing, is not to last long. In fact by the time he meets up with Spider-Man in Marvel Team-Up # 55 (March 1977) a few months later, by some cosmic reverse trick [or writer’s lapse], he is back to normal size, just in time for the last round-up. As it turns out, for the second time around… 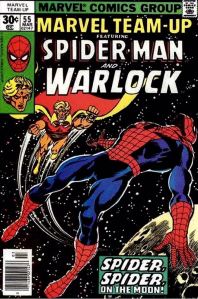 It’s about time. I’ve waited almost twenty years for that prick to either be overthrown or killed in office, the usual end for such dictators. In his thirty years in power, Omar al-Bashir is responsible for the genocide in Darfur as well as carrying on a war with his own people that only ended in 2005, ironically under the George W. Bush administration. While I’m amazed and grateful W’s people were able to bring an end to their 20-year conflict, his silence on Darfur was appalling.

The next few weeks will tell the tale on whether the overthrow of Bashir heralds real change or more of the same. Since its so-called independence in 1956, the people of the Sudan has been subjected to one military coup after another. Perhaps the infusion of young voices in the government would bring an improvement. Rescinding sharia law would also be welcome. Whether the latest coup-leaders permit any real change again will remain a wide-open question for now.