How do you progress with a character you adore? Trust me on this, as the author and creator you are the last person with any objectivity on this subject. I’ve been carrying the soul of my OC Jamai since my high school days, which isn’t saying much considering way back when she was second banana to her lover Youssou’s predecessor Conan-the-Barbarian wanna-be. Oh yeah, they were white too. A white barbarian tribe in Africa. That’s how much work I had cut out for me.

Well, yes. I brought that on myself. Fortunately, I was connected with some friends in a Seattle group that called itself Writer’s Cramp. I’m trying to remember all the details; forgive for if I get a few wrong. I was invited to one such meeting, in Kent I believe, and as we were leaving for home, Fran asked what I thought. I just spent two hours reviewing the works of five people who were considerably more talented and imaginative than I was, who took considerable pleasure in ripping their precious works to shreds. All I could say was, “You guys are vicious!”

That kind of breaking things down from the ground up was exactly what I needed. It was a hard couple of years, but I am grateful to all my friends for the grueling education in improving your science fiction writing that I acquired. What this meant for Jamai was that I had to take a few months off to do a hard reset. 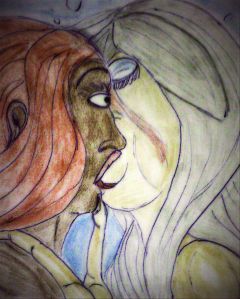 For starter, that whole ‘white barbarians in an African setting’ b.s. had got to go. Second, and in no way would I suggest there was a stark moment of enlightenment that drove my thinking at this point. Doesn’t really happen in writing, folks. Sorry. At some point, however, I started putting Jamai face-forward, as she seemed to be the stronger character, even with the shoddy works I’d been showcasing her in before.

So where did that leave us? Well, now we had a new problem, something you may have noticed with most TV programs and comic book characters. Namely, that at the beginning of each story Jamai wound up at the same point she started at in the last fekking story! My strategy, such as it was, would be to lead up to the big life-defining conflict she’d face as an adult. The new stories began in childhood and would lead her through her teens. My friends in Writers Cramp pointed this weakness out to me, and honestly, I didn’t want to hear it! I knew what I was doing! Heh heh, I thought did, anyway.

Took a while for the lesson to sink in. Things happened. I lost contact with Cramp, and in the Double-Oughts, the ever-lovin’ 2000’s, I was engaged in a self-engaged quest to raise awareness for the issue of the slave trade in the Sudan. I was proud of the work I did with my fictional team, the Emancipation Posse; I think I did some of my best work with this book collection. I loved these people: Kate, Fong, Quench and Dru. And about three stories in, I added my favorite OC to the mix.

This wasn’t the same girl I’d ben writing tales for before, though. This was Old Jamai, hereafter known as Granny. I liked Old Jamai. She was confident, self-assured, a spiritual guide who did not suffer fools. I needed that time apart in her narrative to jog my brain cells and figure out how that young lady grows into the goddess she would become. And in a way I’m still exploring that issue.

in paperback and Kindle