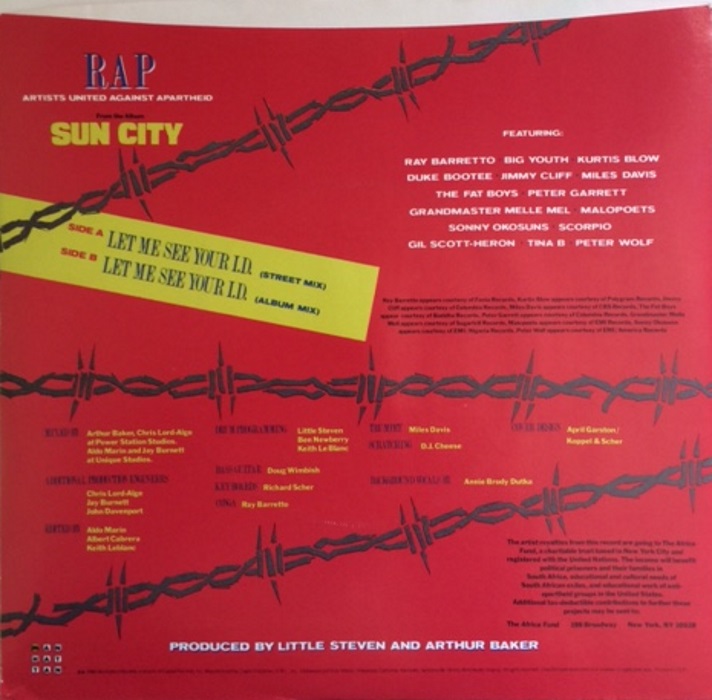 It isn’t often that a rap song changes my perspective. I’m admittedly not a great fan of rap music; if I want to be yelled at, I have people I work with for that. On the other hand it does throw in some off-the-wall references to kung fu, literary figures and historical events we don’t want to think about.

In 1985 Little Steven Van Zandt drew together a unique collective of musicians from across the spectrum, for the purpose of protesting against the racist Apartheid regime in South Africa. The project Sun City drew its name from the glittering resort in the so-called ‘homeland’ of Bophuthatswana, which was meant to showcase the ‘greatness’ of white South Africa, and which had already attracted prominent pop artists to perform at their casino.

Perhaps today it can be seen as an artifact of the late ’80’s; or, it may have a frightening relevance considering the exposure of the filthy underbelly of white supremacy here in our United States. What I referenced in the beginning of this piece was Sun City‘s rap track, “Let Me See Your I.D.”, meaning the passbooks all black South Africans over the age of 16 were required to carry on them at all times. If it was not produced on demand, black persons would be jailed and fined. As of 1985,13 million people had been jailed for pass law offenses.

It begins with a concept so obvious that it shouldn’t be so mind-blowing. Grandmaster Melle Mel chants, “Everybody uses black & white/ to draw the line between wrong & right/ but If you use your eyes you can really see”, that ‘white’ is really pink while skin that’s ‘black’ is really brown. Think about that; your skin is not white. Peach at best, maybe. And black, well, that covers a range of shades, none of them pure black.

Poet and novelist Gil Scott-Heron provides a running narration as subtle as the raps are not. “The word casualties comes up a lot…people are talking about isms…” But people are dying, he says, and there’s nothing casual about that. “Let Me See Your I.D.” showcases the talents of Grandmaster Melle Mel, Scorpio from Grandmaster Flash & the Furious Five, Peter Wolf, Kurtis Blow, the Fat Boys, Gil Scott-Heron, Sonny Okosuns, The Malopoets form South Africa. Jimmy Cliff, Duke Bootee and more.

Sadly this track is unavailable for download and I could only find it online as a vinyl single. If you want to hear it today, ironically enough you’d have to find an unauthorized upload on YouTube and break the law. 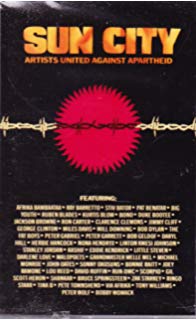 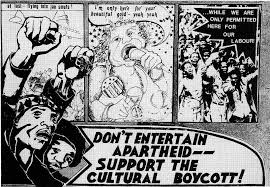 One thought on “Let Me See Your I.D.–Artists United Against Apartheid, 1985”