I’ve been reading a lot of Jim Starlin this year. It hadn’t meant anything before; I go on binges with one author or another and run with it till my interest in them is exhausted. I’d been following Starlin’s work in comics from the beginning of his career. He’s always espoused far-out conceptions and abstractions that appealed to a warped mind like mine. This time, I think there’s more to it than that.

I want to assure everyone up front, my family especially, that I am not contemplating suicide. I have no intention to harm myself in any way. That being said, I think we can all agree this has been a shitty last six months. I’ve lost four family members, people I’ve known all my life. My father committed suicide November 1st; the very next day my uncle Rick suffered a stroke. My father’s twin brother Wayne gave up and passed away a month later. My brother Eddie was taken by cancer, and another brother of mine is fighting the same insideous disease. He’s a stubborn cuss and he’s determined to fight it, and maybe give the big C a kick in the groin while he’s at it, and I’m proud of him for that.

Losing Eddie was hard. In a way he’s had a very big influence on the artist I’ve become. He was an artist in his own right; he’d done some beautiful work in the ’70’s, and we had a sketch book of his work at the funeral. Without him I probably wouldn’t have been such a Beatlemaniac, never been introduced to the wide world of comic books. Artists are no stranger to my family. 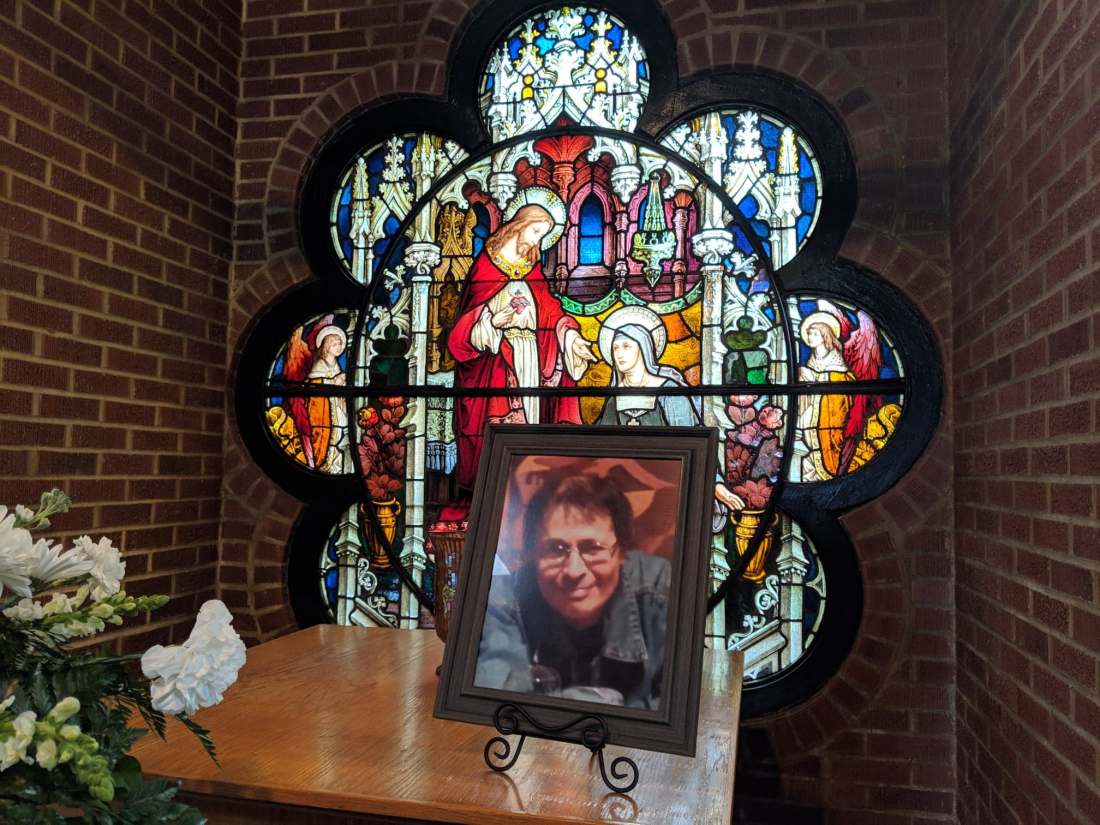 I’m still very angry at my father. We’ve all shared our grief and confusion. He was our patriarch, our rock for at least four generations; we’d come to rely on his stubborn good sense and the advice which may not have been we’d WANT to hear, but was usually what we NEEDED to hear. I’ve come to a point where my overriding sense is anger. Why didn’t he talk to anyone, tell us how he was feeling? Why didn’t he say anything? I know I’m not the only one feeling this. I’ve vented some of my feelings into my writing and my art, but that does nothing to relieve that empty hole in our lives that’ll never be filled.

Okay, what the @*%$ does this have to do with Starlin? Part of it may be that he crafts characters with suicidal tendencies. Honestly, when I first started reading comics I wasn’t paying a whole lot of attention to the names of the artists, apart from Jack Kirby and Jim Steranko. If a cover is striking, if the implied scenario looks you right in the face and grabs you by the nethers, I’m hooked. ‘Chicks with ample bosoms’ were not as big a draw in the 1970’s (at least not to my untainted eyes–hee hee hee).

I didn’t make a connection between what I was feeling and what I was reading till one night at work. I work the late shift; there’s not that many people in the store, which means I usually have way too much time to think. I was reading his book, The Art of Jim Starlin , thinking about the kind of heroes I admired and it just it me, and I wondered if I should be worried.

I haven’t been very demonstrative of my grief, apart from too many angry outbursts. My tendency is to withdraw into myself, even more than I usually do. I suppose I could have worse escapes than comic books. They’re my fall-back, my go-to when I need to relax and refresh. Except…

There was this Essential Warlock collection I’d been avoiding at the library. Adam Warlock was one of those heroes I’d gravitated to in the ’70s who nobody else seemed to take an interest in, but the point is this book was large–massive–like 576 pages. I’d passed it by for months ’cause I wasn’t ready for that kind of commitment. Then when I finally got around to picking it up…it was checked out. Of course it was. So I put in a hold and finally got the complete story I’d seen in drips and drabs over the years.

Here’s the nub of it; when Starlin took over the series, he was in a bad way. He went  from high school straight into the Navy, spending the next three and a half years overseas. He became a member of the Navy’s aviation division as a photographer’s mate. He was sent from base camp to Sicily, then transferred to an intelligence unit in Southeast Asia. There’s more to the story, but here’s what he said about it:

“I was still pretty messed up psychologically, living on too much booze and drugs and had split up with the lovely Heather [his then-girlfriend]. So it should come as no surprise that what I ended up changing Warlock into was a suicidal paranoid/ schizophrenic.”

It wouldn’t be the last time he put a character through its suicidal paces. in the 1986 DC miniseries Cosmic Odyssey, Green Lantern John Stewart destroys an entire solar system because of his arrogance and stupidity. He felt all those millions of deaths through his power ring. He was frighteningly aware of what he’d done and he was ready to die. Martian Manhunter J’onn J’onzz give him a tough love speech, which was probably not the best approach to a man on the verge of killing himself, but it seemed to work. Stewart put the gun down, calls back his ring and says “Screw you, J’onzz” before leaving the room.

I’d picked up a book at a library sale, a cheap book that looked like it might help me understand my father’s suicide. But when I got it home, (1) I found it had a religious slant, and (2) as soon as he wrote about his father being a coward, I put that f—-r down. I didn’t need to hear that. I may never know why he did it, I may be angry at my father, but I don’t believe he was a coward, and I don’t need some religious putz’s judgmental crap on the subject right now.

I’m not looking to punish myself but here’s the other thing about Jim Starlin: his work is not easy reading. Adam Warlock in particular is a character who puts on a front of serene indifference and self-righteousness, while inside he’s struggling with nagging self-doubt and guilt over the consequences of his actions. Starlin’s stories are usually not a day-trip to another galaxy where Batman quips, “Oh, a giant starfish is about to swallow Gotham. Hmm. I have a Bat-pill for that.” 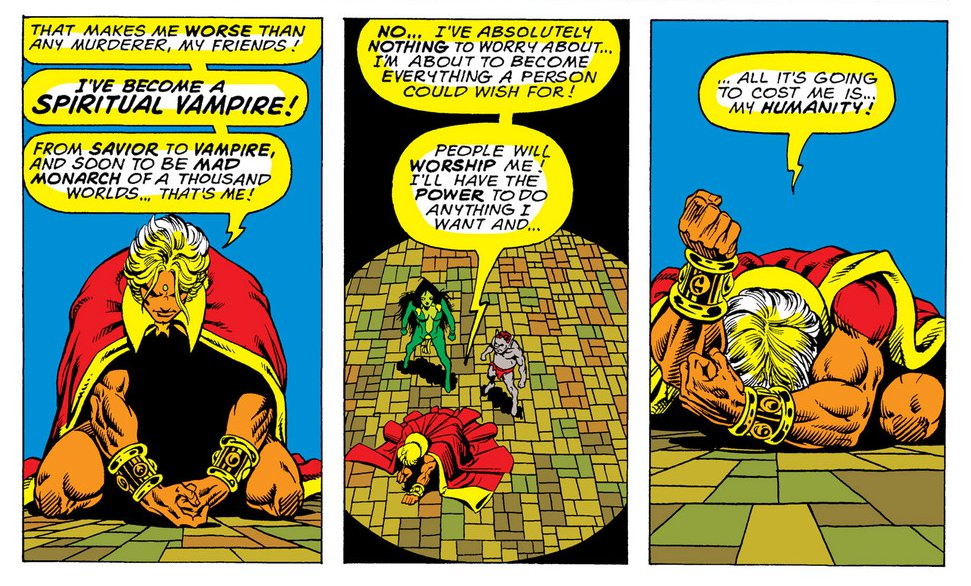 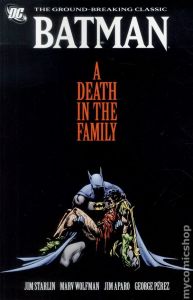 {Batman doesn’t get off scott-free, sometimes]

I’ve been fortunate to have a therapist who’s been helping me through these hard times, a man I’ll always be grateful for. I’ve talked this through with my wife and my therapist, this sudden obsession with Starlin and my own troubles, and I guess we can all agree it’s something that’s helping me cope. I have no answers for those others groping to make sense of what must seem to be a senseless act. My wife and son worry about me as much as I’m worried for them.

I try to get through each day, try not to think too much about the fact that I don’t have that rock to fall back on now, that I have to somehow be the one my immediate family depends on. I just hope I’m up to it.